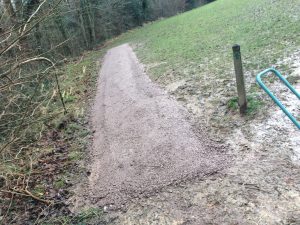 Work has started on additional footpath enhancements  on the Estate.

Most of our grounds are on clay and become very boggy in the winter months.  A number of footpath improvements have been carried out in recent years and this week some further additions are being made.

Two new paths are being laid down the slope that leads from the playing fields area into the south eastern corner of the wood, and later this week a new surface will be laid across Rutland Meadow, the open clearing in Ashplats Wood.

EGMEL is in constant dialogue with MSDC about such improvements, and we expect that further improvements will be made in due course.