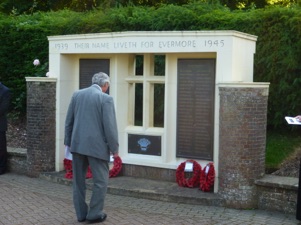 About 100 people assembled at the East Court War Memorial at 4.40pm this afternoon to remember the tragic death of 108 East Grinstead residents who were killed when a bomb was dropped on the Whitehall Cinema in London Road in 1943.

Wreaths were laid by Philip Baker, the Chairman of East Grinstead War Memorial Ltd (right) and other dignitaries, and the short service included prayers and a period of silence for reflection.